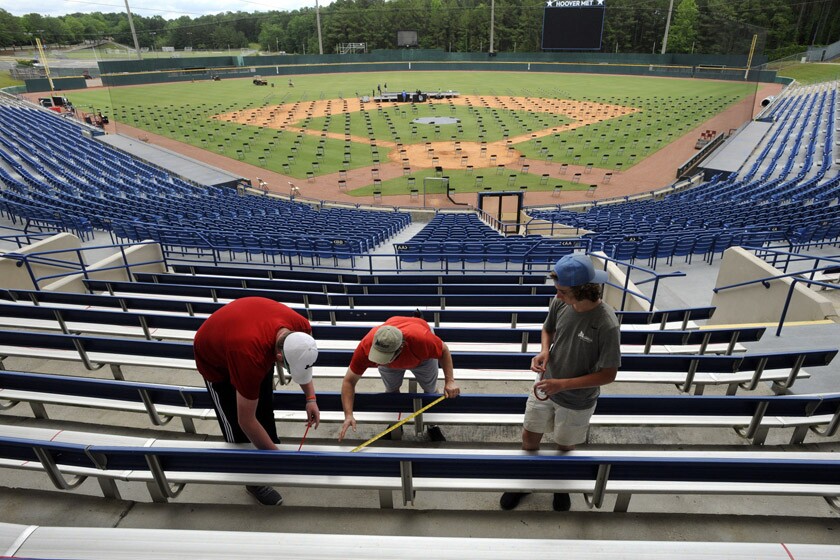 Workers block off seats with red tape May 19 as they prepare for a large high school graduation ceremony in Hoover, Ala. (Associated Press)

High schools nationwide have canceled or postponed traditional graduation ceremonies to avoid worsening the spread of the coronavirus, but some are going ahead with full-fledged springtime commencement exercises as usual, with tweaks to account for health concerns.

Thousands of graduates, parents, siblings, and grandparents will gather at a nearly 11,000-seat stadium on Wednesday and Thursday nights in the Birmingham suburb of Hoover as its two high schools — among the largest in Alabama — hold traditional commencement exercises despite COVID-19.

A school in a nearby city held its ceremony Tuesday, with chairs for more than 540 graduates spread apart across a football field and a keynote address by Alabama’s state school superintendent, Eric Mackey. Few in attendance wore protective face masks, and seniors hugged and gathered in tight groups of friends for pictures.

Dr. Michael Saag, who treats infectious diseases at the University of Alabama at Birmingham, said the threat of spreading the coronavirus poses too great a risk to hold such ceremonies. Virus carriers without symptoms could unknowingly infect others, he said.

Saag has a particularly informed perspective: He survived COVID-19 after being infected in March.

“Having had this before, even if you survive it, which most people do, it’s still a harrowing thing to go through,” said Saag, now back at work. 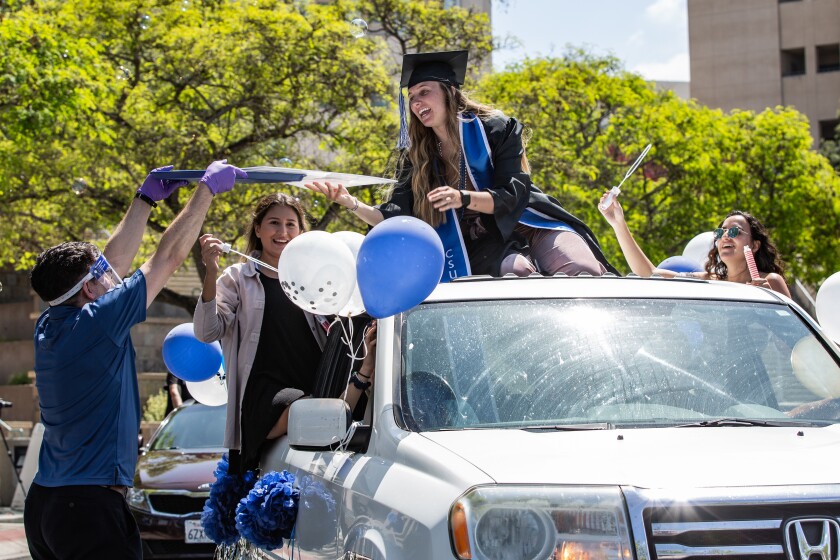 For the ceremonies, hundreds of chairs for graduates have been spread across the dirt infield; spectators will sit on metal bleachers or in blue stadium seats. Workers applied red tape to seats that spectators are to avoid.

Kathy Murphy, the city school superintendent, said the ceremonies will comply with the rules.

“All of our students will be celebrated, even those who choose not to come, and we understand that. But we will call their names, their names will appear on the large Jumbotron,” Murphy said in a video posted online.

Schools in California planned virtual graduations after the state canceled traditional events, and students at an Illinois school walked across a stage in an otherwise empty auditorium. Some systems delayed ceremonies until the summer, and President Obama recorded a video graduation speech for seniors. At some schools, graduating classes were split into smaller groups for live ceremonies.

Some, mostly smaller schools have held traditional commencements for entire classes. But Spain Park and Hoover are two of the largest, top-ranked state schools. Both are in a heavily populated area, making such ceremonies all the riskier, critics said.

As a precaution, students are being given face masks, along with instructions not to hug friends, exchange high fives, toss caps or linger afterward. Tickets are limited, and everyone present must wear a face covering.

Still, the numbers of potential attendees are daunting at a time when sporting events, concerts, and movies are still prohibited because of crowd concerns.

Some 390 seniors will graduate on Wednesday night from Spain Park, meaning about 1,950 graduates and guests could attend. Another 690 will graduate on Thursday from Hoover High, so some 3,450 people could be inside Hoover Metropolitan Stadium.

Critics say that even with the rules, such huge ceremonies could hasten additional coronavirus transmission in metro Birmingham, an area of more than 1 million people. The city of Hoover, with 85,000 residents, sits astride Shelby and Jefferson counties, which have more than 1,770 cases of COVID-19 combined.

Bonnie Kaiser, a 2004 graduate of Hoover High School who teaches in the Department of Anthropology and Global Health Program at UC San Diego, was among 31 health professionals and system alumni who signed an open letter asking officials to reconsider the ceremonies.

“I think the thing is there’s not a way to do it safely even if everyone has perfect behavior as far as what is being recommended, and we know at a graduation that just will not happen,” Kaiser said in an interview.

Parents pleased that their children could have a traditional graduation ceremony flooded the school’s social media feeds with thanks to school officials, But critics also aired their complaints. And some top-ranked students said they won’t attend.

Omar Mohammad, a 17-year-old senior at Spain Park, organized a small protest outside the graduation site Saturday with about three dozen supporters. He plans to skip his graduation, calling the ceremony “unsafe and irresponsible.”

“All it takes is one asymptomatic person handing out fliers to others to make it spread,” Mohammad said. “This isn’t about graduation. It’s about Hoover. If you get a disease you can spread it.”

Murphy, the city superintendent, said the ceremonies are optional, and any student with health problems or safety concerns can set up a “more personalized” graduation with their principal.

South of Hoover in Alabaster, Thompson High School held a traditional graduation ceremony in its football stadium Tuesday night, limiting the crowd to 2,500 guests, or roughly half the normal capacity, but with no requirements for masks. Senior Jael Janae Johnson thanked God for the event in the opening prayer.

“This wouldn’t be possible without your will,” she said.