Despite failing almost all of his courses, the student somehow is ranked near the top half of his class: ‘He didn’t fail, the school failed him’

Like Blaze News? Get the news that matters most delivered directly to your inbox.

POLL: What scares you the most?

But the station said France was shocked to learn that her 17-year-old passed only three classes in four years, has a 0.13 grade point average, and now is getting sent back to the 9th grade.

Yet he’s still ranked near the top half of his class of 120, the station added.

What that says about students rankedlowerthan him is beside the point. France told WBFF’s Project Baltimore she never knew how her son was performing until last month and assumed all was well since he kept getting promoted to the next grade — but now he has to start over.

What are the details?

“I’m just assuming that if you are passing, that you have the proper things to go to the next grade and the right grades, you have the right credits,” France told the station.

In addition to failing 22 classes, her son was late or absent 272 days — yet no one from the school told France her son was failing and not going to class, WBFF reported.

In all this time, only one teacher requested a parent conference — but France said it never happened, the station said.

“I feel like they never gave my son an opportunity, like if there was an issue with him, not advancing or not progressing, that they should have contacted me first, three years ago,” she added to WBFF.

Incredibly, transcripts show France’s son is ranked No. 62 out of 120 students — nearly in the top half of his class, the station said. This means nearly half his classmates — 58 of them — are doing worse academically, WBFF said.

What did school officials have to say?

A Baltimore City Public Schools administrator who asked not to be identified for fear of retaliation told the station the school system failed France’s son.

“I get angry. There’s nothing but frustration,” the administrator told WBFF. “We see on the news the crime that occurs, the murders, the shootings, we know that there are high levels of poverty in Baltimore. Things like this are adding to that. His transcript is not unusual to me. I’ve seen many transcripts, many report cards, like this particular student.”

The administrator noted to the station that the district failed because it has protocols and interventions set up to help students who are falling behind or have low attendance — but that they didn’t happen in the case of France’s son.

WBFF said City Schools CEO Sonja Santelises wouldn’t consent to an interview, but the station noted that it received a two-page statement explaining what should happen when a student is chronically absent or failing.

The district says students received a letter about their academic status this past summer, and records can be accessed through the campus portal. When a student is absent, an automated call is placed to the number on file. The statement also said the school conducted recent home visits and the student’s parent visited the school. France says none of that happened.

What the statement does not address, is why France’s son was promoted despite failing classes. It doesn’t discuss his class rank, or the 58 other students with a GPA of 0.13 or lower. But it does say North Avenue is “reviewing actions that impacted student outcomes” at the school prior to this year.

The district administrator who spoke to the station on the condition of anonymity said he would tell France that “I didn’t have a hand on this student, but I worked for City Schools. So, he is one of my kids. I would hug her, and I would apologize profusely.”

France — who has three children and works three jobs — added to the station that her son is “a good kid. He didn’t deserve that. Where are the mentors? Where is the help for him? I hate that this is happening to my child.”

She pulled her son out of Augusta Fells and enrolled him in an accelerated program at Francis M. Wood school in west Baltimore, WBFF said, adding that if her son works hard, he could graduate by 2023.

A subsequent story from the station reported that the district has known for almost two years about problems at Augusta Fells Savage Institute for Visual Arts — and that documents show there has been an ongoing investigation into “improper staff conduct” at the school dating back to at least 2019.

The two documents — a memo about the investigation and a letter from Santelises — are on official Baltimore City Public Schools letterhead and were shared Wednesday and Thursday with elected officials from Baltimore City Council and some state legislators, WBFF reported.

In light of the Project Baltimore investigation into a City high school, here’s a look at what was offered as “talking points” to some elected officials in Baltimore & a letter from @BaltCitySchools CEO that is going out today to the City Schools community. 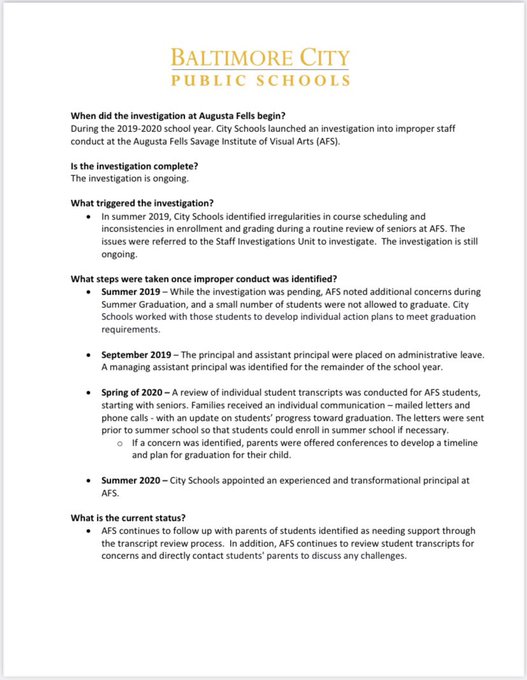 The station said the note to officials provided “talking points” for reference since questions were being asked about the concerns at Augusta Fells Savage.

WBFF reported that the investigation was sparked by a discovery of “irregularities in course scheduling and inconsistencies in enrollment and grading” during a routine review of seniors at the school, which led to leadership changes, though few details were provided.

The district told the station that the letter from Santelises also was sent Thursday to families and staff.