Getting The Numbers Right

712,936 Americans have NOT died from COVID-19 at this point, and it’s important that this lie be shouted down wherever it is trotted out.

“There is no safety for honest men but by believing all possible evil of evil men.”

LAST FEBRUARY, a very compelling illustration of an accurate comparison between the fatality totals of the 1918 Spanish Flu outbreak and the nominal total of COVID-19 (C19) deaths at the time (that is, the spun number typically presented by the MSM, US government officials, and anyone else whose agenda is served by the maintenance of a state of panic among the American people and others) was shared with me by the excellent Todd Tanis. Here is that presentation: 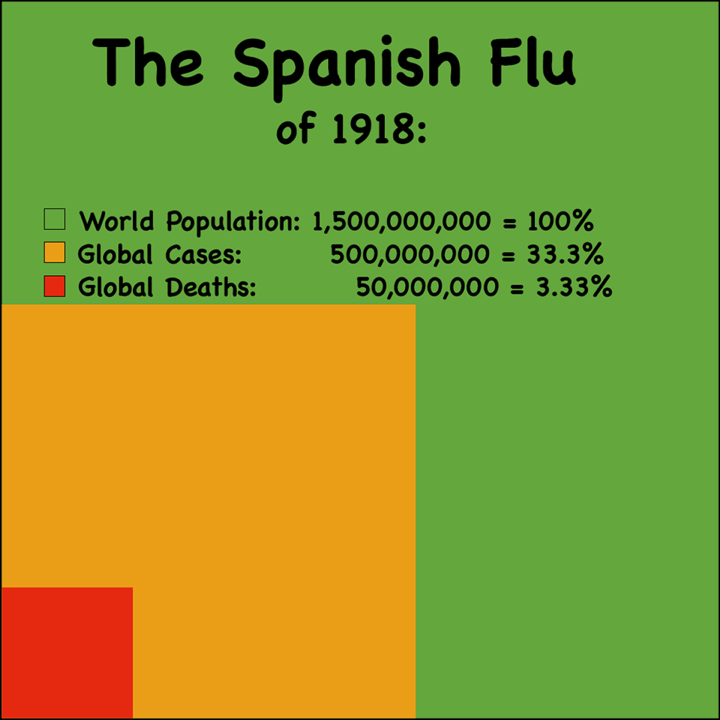 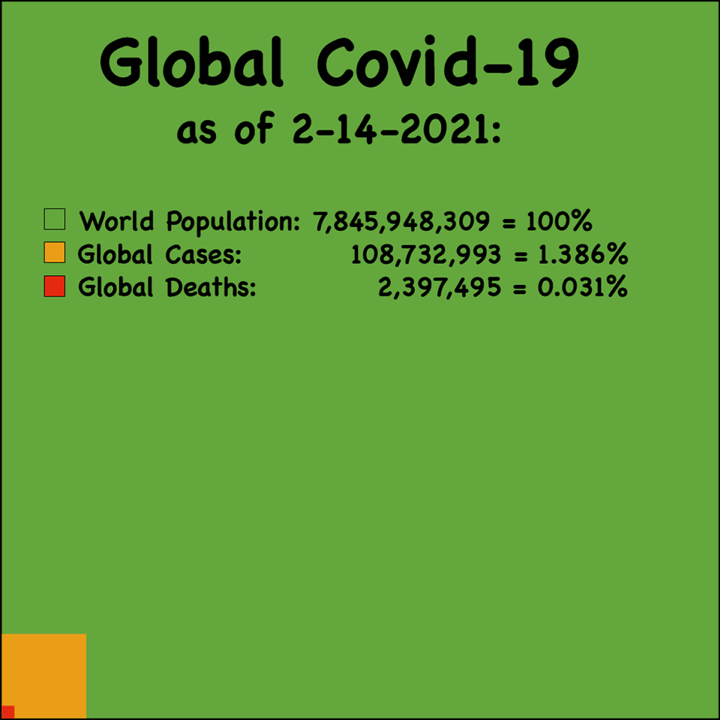 I was pleased to post Todd’s images in an April edition of this newsletter.

In that newsletter post I added an updated graphic. Mine shows the actual number of global C19 fatalities when taking into account the US CDC’s admissions regarding its gimmicked reporting methods— a ploy shared by many governments throughout the world, and confirmed by the excellent research and analysis of Dr. Genevieve Briand of Johns Hopkins.

Under that gimmicked regime, people who die of existing fatal conditions (at most complicated by C19 in exactly the same fashion and to no greater a degree than would be true of an infection with the common cold or any other respiratory-compromising virus) are lumped in with those who can be said to have actually died from the C19 infection itself. Excluding those mere “with COVID” deaths and counting only the “from COVID” deaths yields a dramatically different picture: 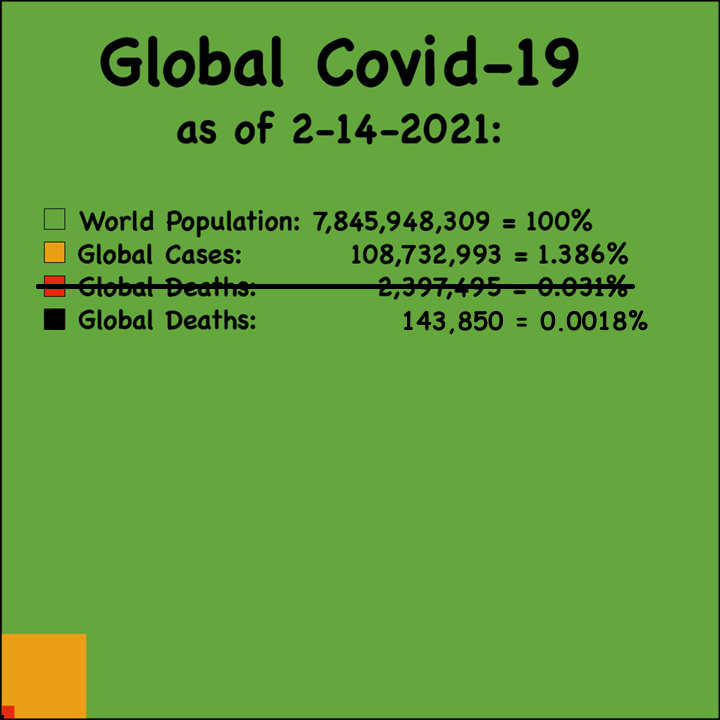 The actual “from COVID” total is represented by the almost-too-small-to-see black square in the lower-left corner of the image.

Updating with today’s numbers leaves the same picture. Today we are told that worldwide, there have been a scary-sounding 4,845,989 C19 deaths. Corrected to exclude fraudulent puffery, however, that number is actually just ~290,759. This is a big number, surely, but still only ~.003% of the world population, and only a tiny fraction of the relative death toll of the Spanish Flu.

Here in the US, the real numbers are similarly at odds with the “official” panic-mongering figures. As of Sunday, October 10, 2021, as reported in the Detroit Free Press, Johns Hopkins University declares that 712,936 Americans have died because of C19.

However, correcting for the CDC’s acknowledged fraud factor, we find that the actual total of American fatalities from C19 to date is a much less panic-inducing 42,776. That’s a mere .012ish% of the US population of 331,449,281 (as of April, 2020, per the US Census Bureau) and, for purposes of a reference point, a much smaller toll than the number of Americans who typically die from the flu over any 20-month period.

OVER THE WEEKEND UPSTANDING PILOTS for Southwest Airlines made a dramatic statement on behalf of freedom and the American way. These good folks stayed home, grounding flights all over the country. Air traffic controllers at a major hub in Florida did the same.

The issue, of course, is Joe Biden’s tyrannical and scientifically unsupported “vaccine mandate”. That order is meant to force companies like Southwest (and bureaucracies like the FAA) to require their workers to inject themselves with so-called “vaccines” which are known to be of no public health value while bearing the substantial risk of adverse reactions, and which would present completely unnecessary risks to every one of the vast numbers of Americans with naturally-acquired immunity due to previous infection or who are in an age group and health status such as to be at little or no risk from COVID.

In response to Biden’s spittle-flecked harangues and threats on behalf of Big Pharma’s profits (I wonder if Joe is getting his beak wet there?) and the “Build Back Better” agenda which relies on Americans falling into a habit of just doing what they’re told, the people that make the planes fly are saying, “No!” Their patience has worn thin, and God bless them.

Other Voices (followed by an important afterword)

“Programmable Digital Currency”: The Next Stage Of The New Normal?

The war on cash’s endgame is here: money replaced by vouchers subject to complete state control.

Building on the bitcoin model, central banks are planning to produce their own “digital currencies”. Removing any and all remaining privacy, granting total control over every transaction, even limiting what ordinary people are allowed to spend their money on.

From the moment bitcoin and other cryptocurrencies first emerged, sold as an independent and alternative medium of exchange outside the financial status quo, it was only a matter of time before the new alternative would be absorbed, modified, and redeployed in service of the state.

For those who have never heard of them, “Central Bank Digital Currencies” (CBDCs) are exactly what they sound like, digitized versions of the pound/dollar/euro etc. issued by central banks.

Like bitcoin (and other crypto), the CBDC would be entirely digital, thus furthering the ongoing war on cash. However, unlike crypto, it would not have any encryption preserving anonymity. In fact, it would be totally the reverse, potentially ending the very idea of financial privacy.

Now, you may not have heard much about the CBDC plans, lost as they are in the tangle of the ongoing “pandemic”, but the campaign is there, chugging along on the back pages for months now. There are stories about it from both Reuters and the Financial Times just today. It’s a long, slow con, but a con nonetheless.

The countries where the idea progressed the furthest are China and the UK. The Chinese Digital Yuan has been in development since 2014, and is subject to ongoing and widespread testing. The UK is nowhere near that stage yet, but Chancellor Rishi Sunak is keenly pushing forward a digital pound that the press are calling “Bitcoin”.

Other countries, including New Zealand, Australia, South Africa and Malaysia, are not far behind.

The US is also researching the idea, with Jerome Powell, head of Federal Reserve, announcing the release of a detailed report on the “digital dollar” in the near future.

The proposals for how these CBDCs might work should be enough to raise red flags in even the most trusting of minds.